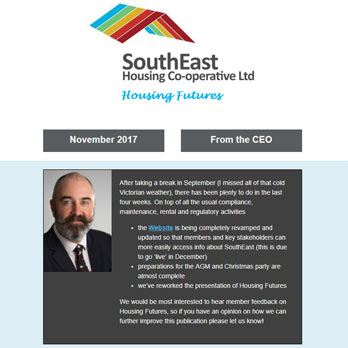 SEHC’s November 2017 Newsletter is here! Check it out and learn more about the First Street Constructions, our Christmas Party and our latest Public Records. 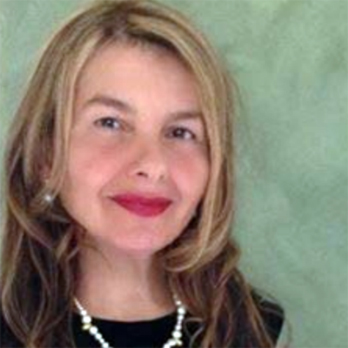 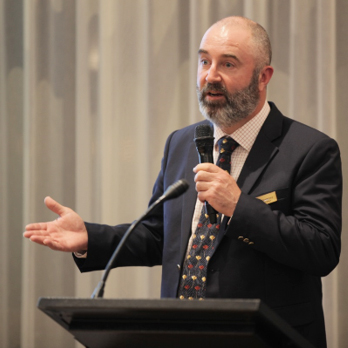 Shooting the Breeze with Steven

Steven Morrissey says he was “blown away” when he encountered the community housing sector twelve months ago. On the brink of becoming SouthEast Housing Co-op’s new CEO, he said he hadn’t realised “how important” the sector was (this observation perhaps confident that community housing still hides its light under a bushel). But now he is a serious convert and says his mission is to pull out all stops to foster its growth.

One of three boys, Steven grew up in Melbourne but spent most of his adult life in Gippsland. With a lifelong love of the great outdoors he now lives in Warragul, which gives him ready access to some of Victoria’s remoter locations. Luckily his wife, a “local girl”, shares his enthusiasm for fishing – he laughs that they spent their honeymoon in a campervan travelling around Tasmania doing (mostly) just that!

Steven’s career path echoes that of many within the sector – he came to community housing via a circuitous route. After leaving school he worked for the Commonwealth Bank for some years before joining his dad’s business and qualifying as an electrician. He went on to join Gippsland Group Training, a not for profit organisation which trains and employs apprentices throughout the Latrobe Valley. Before long Steven had moved into the management of the organisation, prompting him to embark on a Masters of Business Management at Monash Uni. (He must have been a good advertisement for this pursuit as both his daughters are now studying business management at undergraduate level, at Swinburne.)

Steven had by now developed a strong commitment to the not for profit sector and knew that this was where his future lay. Although asserting that he’s not really sure what the source of this impulse might be, he goes on to admit that his mum, the “communist” in the family (nickname ‘Kamerad Robski’), is a card carrying member of the ALP within whom resides a steadfast social conscience (quirkily combined with a love of French Champagne).

An employment enterprise which offered jobs for those with a disability was his next professional port of call. Also based in the Latrobe Valley, this could seem like an impossible gig, given the ever rising level of unemployment amongst the “mainstream” population, particularly young people. But against the odds, Latrobe Valley Enterprises has established what have now become four highly successful businesses. Paper recycling, sign making and business support services. The fourth venture, Gippsland’s Grounds Maintenance, was inundated with work after the bushfire and has recently landed a big contract with Telstra to provide its services from Wonthaggi through to the NSW border. These enterprises are a great mix as they offer a wide range of opportunities to those with physical and intellectual disabilities’.

SouthEast’s CEO says that his many years of working in not for profit and with community based boards of management have equipped him well to deal with the often robust debates that characterise co-op’s governing bodies. There has been much discussion of late about how to manage downsizing – a complex “asset management” issue that affects not just co-ops but the whole community housing sector as a generation of children leave home. But while empty nesters will be encouraged to occupy smaller dwellings as these come on line, there will be no “pitch forking” of tenants out of properties at SouthEast, he says. Rather, the co-op has embarked on an education process to help everyone understand the issue and how they may be able to help as their family circumstances change.

You get the sense that Steven prefers to be the voice of moderation, whether it relates to the long lasting effects of the pollution generated by the Hazelwood power station bushfire (probably overstated) or the controversial importation of the Adler lever-action shotgun (a storm in a teacup). The issue of gun control comes up because Steven is a keen target shooter and hunter. This pastime also serves the public interest insofar as he enjoys the challenge of hunting the introduced Sambar deer, which are a serious pest on both public and private land – but which offer up delicious “wild” meat, he says. This interest has taken him as far as Scotland and Sweden, hunting mainly birds; but the biggest prize – a moose

has so far eluded him. Steven’s matter-of-fact response to critics of the sport is that, “if you’re going to eat meat, something’s got to die.” Both his daughters are also excellent shots.

Back on the work front, the co-op’s CEO observes that what goes around invariably comes around. It turns out that his experience as a tradie and electrical contractor has proved invaluable in the context of the co-op as it means that he can readily evaluate properties, has a handle on costs and understands how the building industry works. He expresses confidence that these skills will contribute to the organisation’s ability to be “nimble”, which in turn should translate into growth for SouthEast Housing (the co-op has acquired four new properties this year via support from the state government’s Rapid Housing Assistance Fund.

Certainly, in an environment where the public purse is otherwise limited, this newcomer to the business of community housing displays all the right qualities. Steven is at once pragmatic – not being hidebound by old funding paradigms – and refreshingly optimistic. His relatively recent introduction to the sector and his “surprise at how many people had a roof over their heads who may otherwise have been homeless,” has been a spur to action that may be the envy of a more seasoned community housing manager. 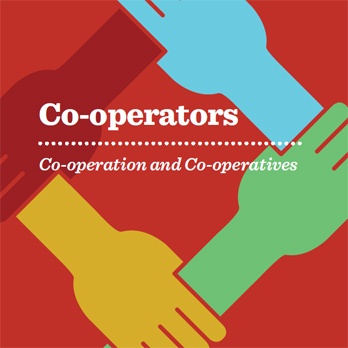 Cooperators – A Collection of Cooperators Stories is a 99-page collection of essays about Australian Cooperatives, the experiences of active cooperators, and how cooperatives have impacted on their lives as members and employees. This collection of essays provides living proof of how cooperatives can help transform lives, and reveals the frustrations brought about by seeing the scale of the potential and the difficulties in main-streaming cooperation today. Some of the most powerful contributions are those from activists in the housing cooperative sector. They demonstrate, how ordinary working people can take control of their lives by putting the values of self-help and self-responsibility into practice. Through cooperative action they are able to shape their own lives, not simply respond and react to others.

This collection supports that sentiment, and emphasises the critical importance of cooperative education in ensuring that cooperatives can fulfil their potential. 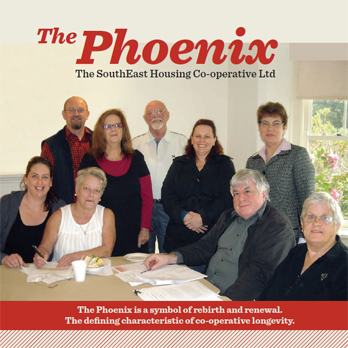 The Phoenix – The SouthEast Housing Cooperative Ltd is a 64-page booklet about the history of SouthEast, written by David Griffiths and published by the cooperative. The main sections of the booklet are: Cooperative Housing, The Early Years, Cooperation Threats and Opportunities, Cooperation Strengths and Weaknesses and Cooperative Adaption and Change.

The booklet also includes a list of milestone dates between 1074-2010, interviews with founding members, a list of housing cooperatives registered with the Housing Registrar, an article by a member on the importance of the cooperative and the International Cooperative Alliance’s Statement on the Cooperative Identity.